Obsidian - the only natural glass

Obsidian is a naturally occurring volcanic glass formed as an extrusive igneous rock. It is produced when felsic lava extruded from a volcano cools rapidly without crystal growth. Obsidian is commonly found within the margins of rhyolitic lava flows known as obsidian flows, where the chemical composition (high silica content) induces a high viscosity and polymerization degree of the lava. The inhibition of atomic diffusion through this highly viscous and polymerized lava explains the lack of crystal growth. Because of this lack of crystal structure, obsidian blade edges can reach almost molecular thinness, leading to its ancient use as projectile points and blades, and its modern use as surgical scalpel blades. 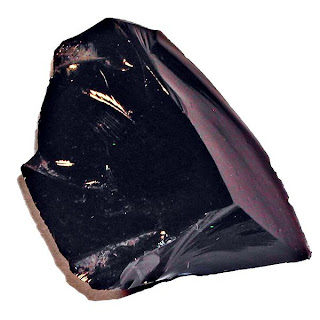 Obsidian is mineral-like, but not a true mineral because as a glass it is not crystalline; in addition, its composition is too complex to comprise a single mineral. It is sometimes classified as a mineraloid. Though obsidian is dark in color similar to mafic rocks such as basalt, obsidian's composition is extremely felsic. Obsidian consists mainly of SiO2 (silicon dioxide), usually 70% or more. Crystalline rocks with obsidian's composition include granite and rhyolite.

Because obsidian is metastable at the Earth's surface (over time the glass becomes fine-grained mineral crystals), no obsidian has been found that is older than Cretaceous age. This breakdown of obsidian is accelerated by the presence of water. Obsidian has low water content when fresh, typically less than 1% water by weight, but becomes progressively hydrated when exposed to groundwater, forming perlite. Tektites were once thought by many to be obsidian produced by lunar volcanic eruptions, though few scientists now adhere to this hypothesis. 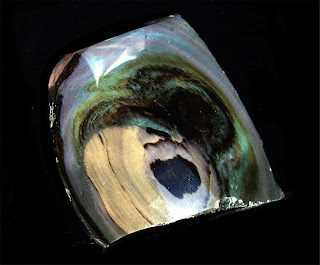 Pure obsidian is usually dark in appearance, though the color varies depending on the presence of impurities.
Iron and magnesium typically give the obsidian a dark green to brown to black color. A very few samples are nearly colorless. In some stones, the inclusion of small, white, radially clustered crystals of cristobalite in the black glass produce a blotchy or snowflake pattern (snowflake obsidian).

It may contain patterns of gas bubbles remaining from the lava flow, aligned along layers created as the molten rock was flowing before being cooled. These bubbles can produce interesting effects such as a golden sheen (sheen obsidian) or a rainbow sheen (rainbow obsidian). 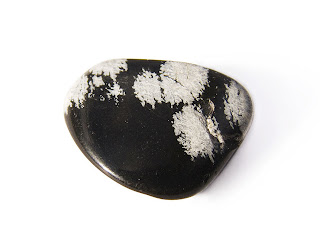 Obsidian can be found in locations which have experienced rhyolitic eruptions. It can be found in Armenia, Canada, Chile, Greece, Iceland, Italy, Japan, Kenya, Mexico, New Zealand, Peru, Scotland, Argentina and United States.

Obsidian flows which may be hiked on are found within the calderas of Newberry Volcano and Medicine Lake Volcano in the Cascade Range of western North America, and at Inyo Craters east of the Sierra Nevada in California. Yellowstone National Park has a mountainside containing obsidian located between Mammoth Hot Springs and the Norris Geyser Basin, and deposits can be found in many other western U.S. states including Arizona, Colorado, New Mexico, Texas, Utah, Washington, Oregon and Idaho. Obsidian can also be found in the eastern U.S. state of Virginia. 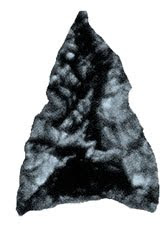 Obsidian was valued in Stone Age cultures because, like flint, it could be fractured to produce sharp blades or arrowheads. Like all glass and some other types of naturally occurring rocks, obsidian breaks with a characteristic conchoidal fracture. It was also polished to create early mirrors.
Modern archaeologists have developed a relative dating system, Obsidian hydration dating, to calculate the age of obsidian artifacts.

In Ubaid in the 5th millennium BC, blades were manufactured from obsidian mined in today's Turkey.

Lithic analysis can be instrumental in understanding prehispanic groups in Mesoamerica. A careful analysis of obsidian in a culture or place can be of considerable use to reconstruct commerce, production, distribution and thereby understand economic, social and political aspects of a civilization. This is the case in Yaxchilán, a Maya city where even warfare implications have been studied linked with obsidian use and its debris.

Another example is the archeological recovery at coastal Chumash sites in California indicating considerable trade with the distant site of Casa Diablo in the Sierra Mountains.


Pre-Columbian Mesoamericans' use of obsidian was extensive and sophisticated; including carved and worked obsidian for tools and decorative objects. Mesoamericans also made a type of sword with obsidian blades mounted in a wooden body. Called a macuahuitl, the weapon was capable of inflicting terrible injuries, combining the sharp cutting edge of an obsidian blade with the ragged cut of a serrated weapon.
Native American people traded obsidian throughout the Americas.

Each volcano and in some cases each volcanic eruption produces a distinguishable type of obsidian, making it possible for archaeologists to trace the origins of a particular artifact. Similar tracing techniques have allowed obsidian to be identified in Greece also as coming from Melos, Nisyros or Yiali, islands in the Aegean Sea. Obsidian cores and blades were traded great distances inland from the coast.


In Chile obsidian tools from Chaitén Volcano have been found as far away as in Chan-Chan 400 km north of the volcano and also in sites 400 km south of it.

Obsidian was also used on Rapa Nui (Easter Island) for edged tools such as Mataia and the pupils of the eyes of their Moai (statues). 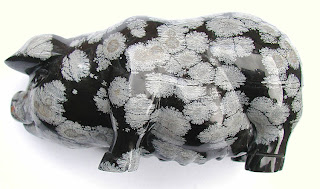 Obsidian has been used for blades in surgery, as well-crafted obsidian blades have a cutting edge many times sharper than high-quality steel surgical scalpels, the cutting edge of the blade being only about 3 nanometers thick.


Even the sharpest metal knife has a jagged, irregular blade when viewed under a strong enough microscope; when examined even under an electron microscope an obsidian blade is still smooth and even.

One study found that obsidian produced narrower scars, fewer inflammatory cells, and less granulation tissue in a group of rats.

Obsidian is also used for ornamental purposes and as a gemstone. It possesses the property of presenting a different appearance according to the manner in which it is cut: when cut in one direction it is jet black; in another it is glistening gray. "Apache tears" are small rounded obsidian nuggets embedded within a grayish-white perlite matrix.
Plinths for audio turntables have been made of obsidian since the 1970s; e.g. the greyish-black SH-10B3 plinth by Technics.