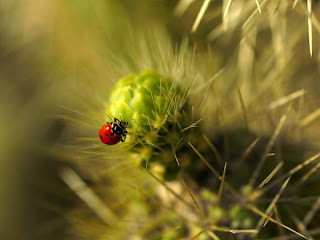 Many people are fond of ladybugs because of their colorful, spotted appearance. But farmers love them for their appetite. Most ladybugs voraciously consume plant-eating insects, such as aphids, and in doing so they help to protect crops. Ladybugs lay hundreds of eggs in the colonies of aphids and other plant-eating pests. When they hatch, the ladybug larvae immediately begin to feed. By the end of its three-to-six-week life, a ladybug may eat some 5,000 aphids.

Ladybugs are also called lady beetles or, in Europe, ladybird beetles. There are about 5,000 different species of these insects, and not all of them have the same appetites. A few ladybugs prey not on plant-eaters but on plants. The Mexican bean beetle and the squash beetle are destructive pests that prey upon the crops mentioned in their names.

Ladybugs appear as half-spheres, tiny, spotted, round or oval-shaped domes. They have short legs and antennae.

Their distinctive spots and attractive colors are meant to make them unappealing to predators. Ladybugs can secrete a fluid from joints in their legs which gives them a foul taste. Their coloring is likely a reminder to any animals that have tried to eat their kind before: "I taste awful." A threatened ladybug may both play dead and secrete the unappetizing substance to protect itself.


"LADYBUG" IN OTHER LANGUAGES: 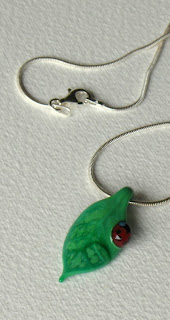 HOW THE LADYBUG GOT ITS NAME:
Legends vary about how the Ladybug came to be named, but the most common (and enduring) is this:   In Europe, during the Middle Ages, swarms of insects were destroying the crops.  The farmers prayed to the Virgin Mary for help.  Soon thereafter the Ladybugs came, devouring the plant-destroying pests and saving the crops!  The farmers called these beautiful insects "The Beetles of Our Lady", and - over time - they eventually became popularly known as "Lady Beetles".  The red wings were said to represent the Virgin's cloak and the black spots were symbolic of both her joys and her sorrows.

LADYBUG LEGENDS:
Nearly ALL cultures believe that a Ladybug is lucky.
Killing one is said to bring sadness and misfortune.
In France, if a Ladybug landed on you,
whatever ailment you had would fly away with the Ladybug.

If a Ladybug is held in the hand while making a wish,
the direction that it flies away to shows where
your luck will come from.
If the spots on the wings of a Ladybug are more than seven,
it's a sign of coming famine.  If less than seven, it means
you will have a good harvest.
In Belgium, people believed that if a Ladybug crawled across
a young girl's hand, she would be married within a year.
People in Switzerland told their young children
that they were brought to them, as babies, by Ladybugs.
(...and we thought Storks did that)!
In some Asian cultures, it is believed that the Ladybug understands
human language, and has been blessed by God, Himself.
In Brussels, the black spots on the back of a Ladybug indicate to the
person holding it how many children he/she will have.
According to a Norse legend, the Ladybug came to earth
riding on a bolt of lightning.
The Victorians in Britain believed that if a Ladybug alighted on your
hand, you would be receiving new gloves.....if it landed on your head,
a new hat would be in your future, and so on.
In the 1800's, some doctors used Ladybugs to treat measles!  They
also believed that if you mashed ladybugs (ewww!) and put them
into a cavity, the insects would stop a toothache!
During the Pioneer days, if a family found a Ladybug in their log cabin
during the winter, it was considered a "Good Omen".
In the Spring, if numerous Ladybugs are seen flying around,
British farmers say it forecasts many bountiful crops.
Many Bretons believe that the arrival of Ladybugs will bring fair weather.
Folklore suggests if you catch a Ladybug in your home, count the number
of spots and that's how many dollars you'll soon find.
In Norway, if a man and a woman spot a Ladybug at the same time,
there will be a romance between them. 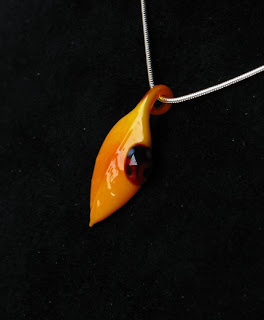 Made like all my other sculptures freeformed in a flame (a very little flame this time) with softglass from Lauscha and Murano.
The silver chain is made of 925er sterling silver and 17.72 inches long.

The leave is about only 1.06 inch long.
You can also choose your favourite colors and mail me your wishes.
~Please regard, that all my work is handmade and unique,

so there can be little variations in color and shape~

Posted by Glasmagie at 3:15 PM