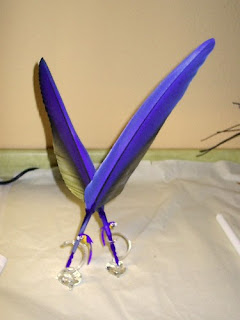 The feather keel and the broad reed feather especially for headings remained the most important instrument for writing on parchment and paper from old Roman into the modern times. Feathers of the raven, peacock, swan or goose proved for the sensitive surface of parchment as best suitably. Either bald scraped or kept in the original status, the natural curvature of the feather of the human hand formed a perfect match. Beside ink, pen and parchment the pen knife - a longer, sharp blade - was the indispensable tool for the writing. With its help the writings were smoothed, disturbing feather flags were scraped, errors erased and the feather points cut and sharpened. 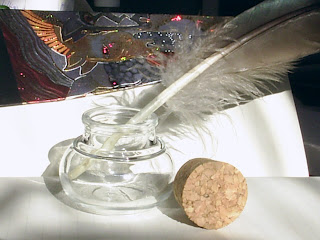 The expansion of trade in the17th and 18th century, the developing sciences and arts, drove the requirement of writing materials into astronomical heights. A goose supplied only 10 to 12 good feather keels. At the beginning of the 19th century approximately 50 million feather keels were used annually in Germany. The European main producers were Russia and Poland. 27 million feather keels were imported by England from St. Petersburg per year. The bank of England used alone 1.5 million. A writer used 5 feather keels per day. It is easy to imagine how often the work had to be interrupted for a careful sharpening. The occupation of the feather cutter spread rapidly. 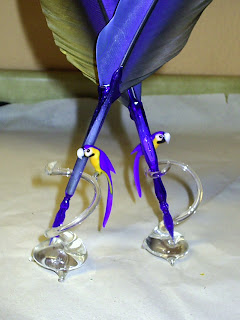 For economic reasons the Londoner bankers thought about a remedy. In the year 1809 a machine, this was able to divide quills lengthwise and crosswise several times, was applied for patent. About 20 pieces could be won in from a feather in such a way. They were sharpened and put into a wooden "penholder". The ancestors of the penholder were born. On the search for pen points, this could not be used up so rapidly, even the glassmaker tried their luck. German, Japanese and also North American glassmaker were the first to test thin glass rods with facets tapered to a point. After immersing in the ink cask a sufficient amount of ink could be collected in the facet-like holes and slowly drop to the point. Despite substantial advantages such as almost no wear and corrosion, useable on wood, paper, leather and similar materials - the glass pen did not become generally accepted. The material broke too easily.
Only as   succeeded to improving the coherence and capillary strength the glass pen became a hit for export. French, American and German manufacturers used this glass pen in fountain pens and offered this as an ideal writing instrument in offices. 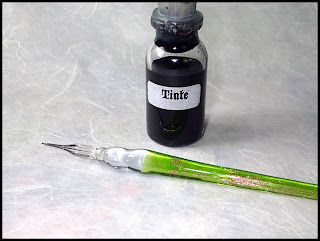