On a rainy sunday on may 9th, Wormy asked his fans to write him a story, people would love, so he shall never be a nobody again. Here are the contributions. Till May 31th you can vote for your favourite. The winner will get these unique handcrafted glass pendant with silverchain, one of the Voters the next feature on this blog for his/her website, blog, shop or whatever he/she choose and Wormy his forever home to live. :-) 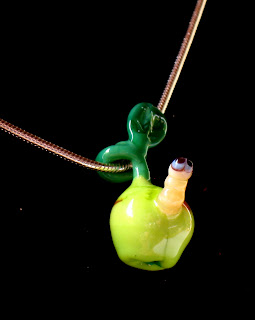 I am a worm. Everyone thinks worms are gross, but I am here to tell you it just isn't so! Worms are very hardworking and noble creatures - Just think! Without worms, water wouldn't drain from the fields, rotten plants and animals wouldn't decompose.. And, I make sure your apples are the very best by testing them before you even buy them!
I am a very smart worm, too! I have two brains. Think thats crazy? Earthworms are the most loving creatures on Earth! Know why? They have five hearts!
Even though you think I am slimy and gross, I am wonderful, necessary, and fascinating.

Once I lived life as a free worm, leaving my casts upon lawns across the land, until that fateful day. It was very early - the best times for worms, as you well know - when I slithered forth, only to be snatched up by a shimmering blue dragon. I was carried across the forests and castles of Germany to be deposited unceremoniously on a workbench. "Ah, another a fine specimen," came that cold, crystal voice, and here I am, forever entombed in my inedible apple.

This article is printed with permission from Worm's Life magazine:


THE EARLY WORM GETS THE APPLE


With the worm estate market booming, it can be heartwrenching when your bid isn't accepted by a seller. Not so in this case. Earl Y. Worm is one of the happiest Earthworms around.

Earl's been trying to find himself a new home for months now. Tired of living in his Mom and Dad's small 2 bedroom dirt condo, he wanted to do the adult thing and buy his own home. Renting was not something he wanted to do. "I told my parents that I wanted to be my own worm but wanted the responsibility of owning my own place.", Earl told Worm's Life.

With the help of one of the area's most prominent worm estate agents, Inch W. Orm, Earl was able to make his dream come true. "This apple had only been on the market for maybe 15 minutes when I got in touch with Earl. We were very lucky.", Mr. Orm explained. "This market is crazy and for a single worm trying to buy a home, it's not easy let me tell you."

In this case, the "Early Worm" got the Apple. Earl, with Mr. Orm's help, put up an offer that can only be described as amazing. Since the Apple has not gone to settlement at the time of this article being written, we cannot give all of the details. But, let's just say that this Apple is still on the tree and is going to stay there, in great condition, for a long long time. "Of course, there's always the chance of human destruction, but I've got good insurance coverage if that happens. I'm the happiest worm around!" Yes, Earl Y.Worm, you are the happest worm around.

Hello. My name is wormy. I am 62 years old, but I look 4 and that is why I am still going strong. I have seen my fair share of apples and would like to tell you about my favorite apple.

The granny smith in the summer of love: It was the summer of '69 and I was happily rising with the sun on a tree on Max Yasgur's farm. I was suddenly startled by the music of Ritchie Havens playing in the distance. I poked my head out of the apple to see what was happening. Hundreds of thousands of kids were gathered on my farm. I felt a jostling and was no sooner plucked from the tree. I was so afraid as somebody's mouth began crunching away at my house. Just before they reached little old me, they tossed my apple over by a rock. A dog then picked me up and carried me around protectively for what seemed like days. Anyway...when I came out of that apple, it was dark and starry. I wriggled my way through the grass for a few hours until I found a cozy new apple that was big square and black with a bunch of holes in it. As the sun rose, I heard "Hey Joe" playing in the background as I was wheeled off in my new home into an equipment truck. It turns out that my new home was an amp that belonged to Pete Townshend from The Who. Pete was okay, but I really hit it off with Roger Daltrey. We are now best friends and work together promoting healthy eating habits across America. I love what I do...and yes, I do enjoy the perks of a brand new apple home of my very own ever day in the comfort of Roger's recording studio.

Hi...I'm Wormy and I'm a worm. Some people think that worms are icky, but I'm not...I brush my teeth, take a shower and have supper like everyone else. I just live in an apple. The Granny Smith that you see me in, is a condo I bought...I tried a Macintosh and both types of Deliciouses, and even a Gala...they had too many parties at the Gala... The Mac was too modern for my taste...and I wasn't keen on the colour scheme of the Deliciouses...Green's so much more me... I like to sit and read and watch Nature outside my apple...I just have to be careful when there's birds around...I can't be early... But other than that I'm a cool person for a worm...

He looks across the land from far up in a tree, taking in the sights that seemed too grand to be true from the ground. At home in his apple he can see the High Elves roaming, casting spells and walking onward, bow and arrow in hand. The falcons, as they soar along with their owners, unnoticing of him in his home, a little green apple. He sighs, for at one time, he would have to escape from their prying eyes. Everything was safe now. Until... The day the elves had picked an apple from the tree. Sir Worm was sleeping as it happened, dreaming that he was falling. He woke up in a basket of other apples; unable to find his safe haven, his small, green apple. After the moment of sadness passed, a shadow blocked the sun from his vision. Another apple was set to fall right on top of him! Quickly, Sir worm scurried away to the edge of the basket, heart pounding as the beautiful elven mages collected apples with magic to bring with them on their journey. Hands prodded and poked and tossed apples here or there, and Sir Worm no longer could see his way from danger. It was nearing the end of the basket, nowhere to hide... Until! He found it! The front door of his home. As fast as he could, he made it, just as the apple was picked up again. Beautiful, Blue eyes in pale skin stared right into his eyes. A moment's silence. The Elf girl had seen him. And then... A SHRIEK of fear, and the sensation of flying. Shouts and questions, then laughing. "Just a worm!" They exclaimed. Pfft. Just a worm. Dusting himself off, Sir worm, still latched to his home, tunneled inside again. Though his home was on the ground again, at least in here he was safe. No Falcon, or even Elf, would want an apple where a worm resides. To this thought, Sir Worm sighed, and settled down to retrieve the sleep he had lost in the calm chaos.

It was a normal, rainy spring day, and Carl the worm was once again looking for a new home. Carl hated spring. Springtime meant lots of rain, and rain meant lots of water flooding his underground home. The rain would force Carl to leave his nice, comfy burrow because the water would make it cave in, and he would have to make another new home afterward. So, for the second time in the same week, Carl glided along, looking for a dry place to dig his new house. Just then, Carl saw something green from the corner of his eye. He slithered closer for a look, and realized that the shiny, green sphere on the ground was an apple. Carl was amazed at his discovery- he had often heard from other worms of the legendary apple, one of the most wonderful places a worm could live in. After all, what other home could you also eat out of? And to think that nobody else had claimed this beauty! Carl eagerly dug into the apple and burrowed his way in, making himself at home. Finally, he had found a home to live in that won’t be washed away by that annoying rain again.


Very important! Please leave a comment after your vote if you wish to take part in the feature. The voting is anonymus so even I cannot see, who voted.

Posted by Glasmagie at 2:23 AM